I did not find Mr. Garland E. Carr via the Census, like I normally look for African American TC home owners. No, this one came to me via someone doing history at the National Archives looking at another topic of which Mr. Carr was involved. What Mr. Carr did I will wait until later to reveal.

A few months after this picture was snapped, his mother along with his sister Genevieve R. Patrick became owners of 1520 1st St NW. This was Square 552 lot 165.

Later in 1936 Elizabeth Carr sold it.

In my next post I’ll talk about what Mr. Carr did to have his picture taken.

The Rehoboth Church of God no longer exists in Washington DC. Nor does it’s 1957 address 1101 8th St NW. There is a convention center at that spot. So if it were still there it would be in Mt. Vernon Sq., next to Shaw. Really doesn’t matter as they did not provide much information to the 1957 Church Survey.

Well this is another in the series of churches participating in the 1957 Northwest Urban Renewal Area church survey. This church survey has never been replicated. There have been other reports but they approach the churches as a whole and not as individual congregations. Churches are interesting as an entity.  Florida Avenue Baptist is completely different from Mt. Sinai Baptist, despite both being Baptist.

Today’s church is Second Baptist Church at 816 3rd Street NW, which is still functioning today in the Mt. Vernon Triangle area. Then as is now, it is an African American church. In 1957, it was a middle aged and middle class END_OF_DOCUMENT_TOKEN_TO_BE_REPLACED 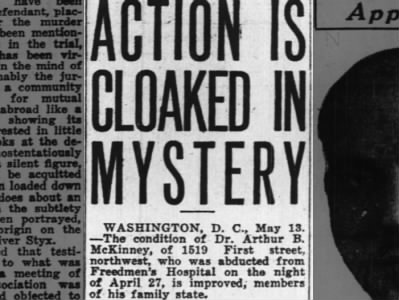 In the 1920 Census, Arthur B. McKinney was a 31 year old doctor living with his mother Della at 1515 1st St. NW. Looking at Ancestry’s family tree, his full name was Arthur Bancroft McKinney. He married Ethel J. Thornton in December of 1920. They apparently had no children. But the family tree fails to note his siblings as Samuel A. and Della McKinney had 5 sons, 2 daughters, a daughter-in-law, and a grandson living with them in 1900 at 63 P St NW. END_OF_DOCUMENT_TOKEN_TO_BE_REPLACED

The problem with Square 616, is that there are old lot numbers and newer lot numbers and they all seem to get jumbled together. But let’s try to do this. Looking at the Recorder of Deeds the earliest document is a deed where Arthur and Ellen sell lot 813 (also lot 11, just to confuse people), which appears to be 83 O St NW, in 1922 to David L. and Mary Ellen Cooper. Mary Ellen….. huh. END_OF_DOCUMENT_TOKEN_TO_BE_REPLACED

Today’s African American Truxton Circle resident from the 1920 Census who owned their home is a thirty-three year old express man named Ernest H. Saulter. He lived at 30 P St NW with his wife Ethel Willie. No children. No boarders. Just those two. The property no longer exists, and the Mundo Verde Public Charter School sits there. When it did exist, it sat across from the space between Langston and Slater schools. Prior to 30 P St NW, Ernest Howard Saulter lived at 433 Rhode Island Ave NW, and 309 I St NW, which also does not exist anymore.

A 1922 city directory shows Mr. Saulter’s business address as 30-32 P St NW. On his 1917 draft card, when he was on Rhode Island, he listed himself as being self-employed.  When looking at the Recorder of Deed records the Saulters owned lots 21, 90, and 832. On the 1919 Baist map above, lot 21 and 832 are pretty much the same lot. In 1921 Clarence M. DeVeile (not Cruella DeVille) sold the property on lot 90 to the Saulters.  DeVeile had bought the property a month earlier from Henrietta Finnegan. In order to purchase it, DeVeile borrowed $1250.00 from what looked to be the Washington Six Percent Permanent Building Association. In November of 1923, the Saulters sold lot 90 to the District of Columbia government.

Lot 21 is confusing. In the old map, it is the old number, it’s part of lot 832 and there is another lot 21 facing North Capitol Street. It’s very hard to tell what’s going on with that, so I will just look at the transactions involving the Saulters. It appears they bought the P St facing lot in 1923 from the estate of Jane Steward formerly Jane Scott. But then it appears that a month or so later they sell it to the DC government.

Looking at other Recorder of Deeds documents, Ernest owned property elsewhere too. In 1924 Ernest and Ethel purchased what could have been 609 Rhode Island Ave NW. There is a vacant lot in that space which is Sq. 442 lot 3. That same year they brought 147 Rhode Island Avenue NW (sq. 3108, lot 0003) which does still exist. The Saulters stop showing up in the Recorder of Deeds records after 1937 with a trustees deed between the Saulters and the Homeowner’s Loan Corporation. That same year the Homeowner’s Loan Corporation sell the 147 Rhode Island Ave NW to Marie H. Malvan and Mildred R. Schey for $4,750.

The last record of Ernest Saulter is in a World War II draft card. The card dates from around 1942. At that time Mr. Saulter is 56 years old. He is living at 805 O St NW, about where the Giant parking garage sits. The contact he has listed is a woman named Estelle Johnson, at the same address. This brings to question, where is Ethel? Mr. Saulter is listed as self-employed but having “defective eyes”. 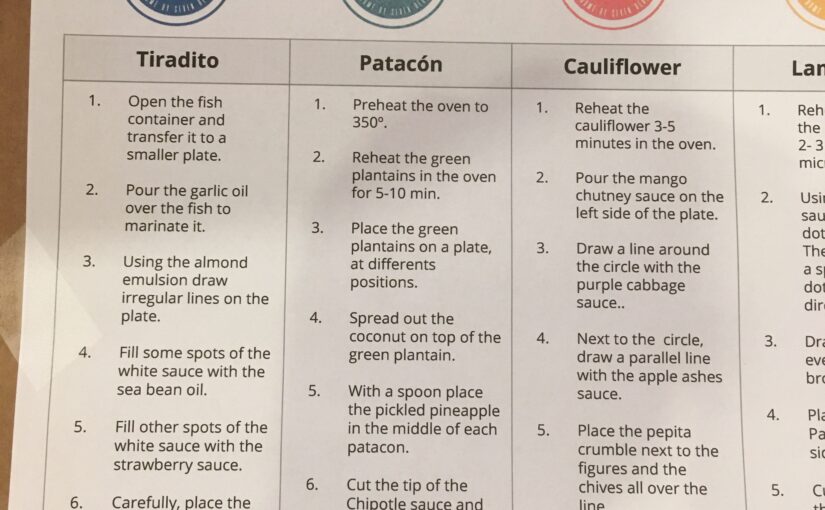 We are in the process of moving to Prince Georges’ County and I look forward to seeing if all the things I disliked about the county when I lived there still apply (car-centric culture, crappy county services, etc).  Part of the process is cleaning out the freezer, eating frozen leftovers and ordering out. Last review was for Masseria, an excellent experience at home. Well Seven Reasons, amazingly topped the Masseria experience.

We ordered for dinner to arrive around the time we normally eat. Normally, I look for something Destructo-kid might eat. Depending on things, we might eat with him or we will decide to wait until he’s asleep and have a nice adult dinner, where we can talk to each other about something other than our dear child. I ordered some Cheese Arepitas, just in case there was nothing for him.

Doordash was the deliver. I got a text… I normally don’t use Doordash. I used to have their app on my phone, but took it off when several delivery companies were overcharging restaurants. Got a text to show where my food was. My food wasn’t picked up until I was expecting it to arrive. We’re in Shaw, the food was in Shaw, so the 10 minutes it took to get to our house.

I’m glad I ordered the arepitas because I was not expecting what came in the two boxes.

When I opened the box, my first thought was ‘This looks like fun!” And I wasn’t going to have fun with Destructo and his usual demands on mommy. END_OF_DOCUMENT_TOKEN_TO_BE_REPLACED

This church used to be know for it’s fugly building.

But this is not about the fug, this is about history. [Yes, yes, we could go on about the history of the Brutalist building that only an architectural historian could love, but I’m here for the people]. Besides, in 1957 they weren’t even at 16th and I NW where the ugly building was. No, they were at 1220 L St NW, which is currently occupied by a nondescript 1980s looking Downtown office building.

The interesting thing about this survey submission is that they say that due to their own church rules they could not provide numbers.  But they did go on to say that most of their members did not live in the Northwest Urban Renewal Area. They don’t give a racial make up of their congregation, nor an idea if they members are white collar or blue. END_OF_DOCUMENT_TOKEN_TO_BE_REPLACED 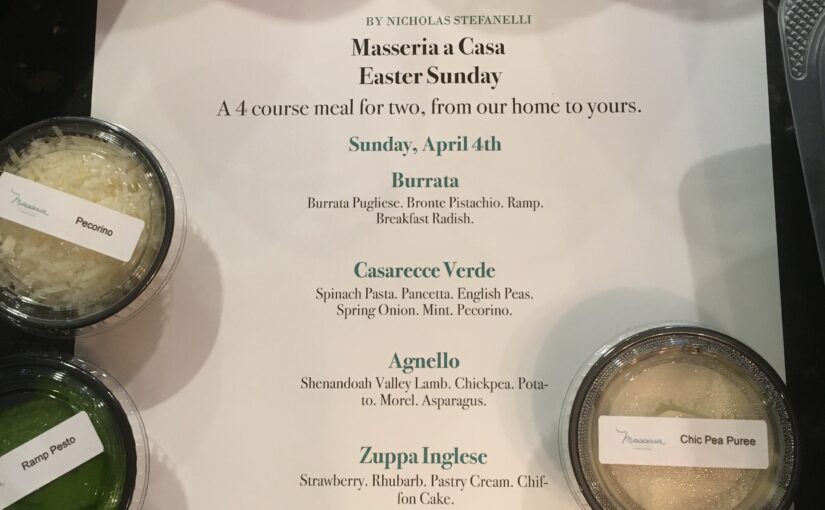 I’m going to take a break from Truxton and Shaw history for my other love, fine dining.

So for Easter we decided to order some food from Masseria, a Michelin starred restaurant. We had the food delivered because both of us have to be home with Destructo-kid or else one of us will go mad.

We ordered the non-alcoholic pairing and that was a good decision. Not only did we get some interesting and tasty drinks, we also got some nice glass bottles. I absolutely recommend this pairing.

I’m really enjoying burrata. I’ve had it before from picking up food from Red Hen and also with this meal. We took it out of the fridge (we had to get Destructo to bed and ate after he was down) and let it get to room temperature. There was a ramp sauce that we assumed went with it, and it added a kick to the already tasty creamy cheese.

Next was the Casarecce Verde. We had given Destructo-kid a bit of this. He didn’t eat all of it so we set some aside for left overs the next day. It was so much better the next day for some strange reason. Maybe that was the empty mommy tummy. It was good the day of, but next day, primo. The paired drink, with the smokey lapsang souchong went very well with this.

I liked everything about the Agnelo lamb dish, except the hard chickpeas. This we had to re-heat in an oven, but I chose to go with 6 minutes in an airfryer. The paired drink had sour cherry in it. The Help hates cherry, but he liked this drink. I think the pomegranate over shadowed the cherry for him.

This was very good and I would recommend this.