The problem with Square 616, is that there are old lot numbers and newer lot numbers and they all seem to get jumbled together. But let’s try to do this. Looking at the Recorder of Deeds the earliest document is a deed where Arthur and Ellen sell lot 813 (also lot 11, just to confuse people), which appears to be 83 O St NW, in 1922 to David L. and Mary Ellen Cooper. Mary Ellen….. huh.

Okay, let’s check that 1900 Census again, where Mary Ellen appears. In that census where they are living on Washington St, Mary Ellen was 12 years old and born in October 1889. The Mary E. Cooper who was living at 24A O St NW in 1930 was born around 1888 (a year off). That Mary Cooper was born in DC, with a Virginia born father (Arthur was born in VA) and a North Carolina born mother (Ellen was born in NC). 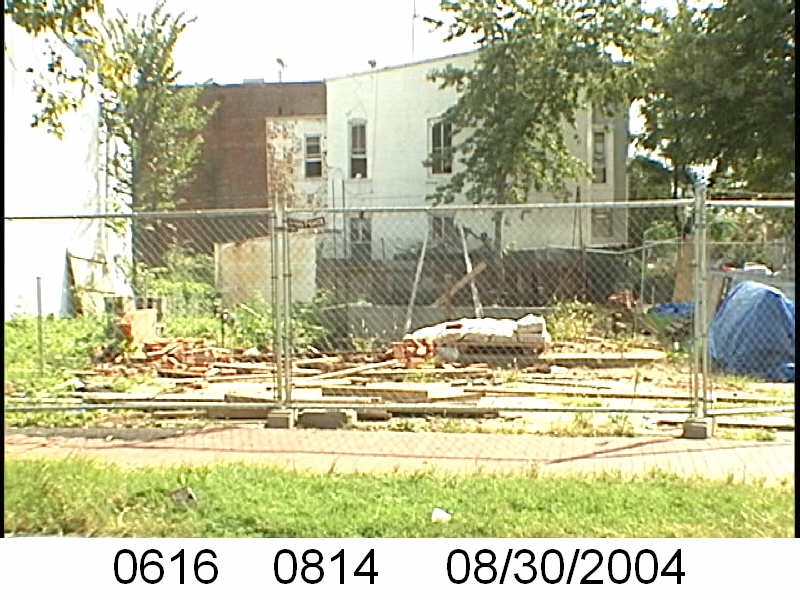 Normally I cut off my search to 1960, but I extended it and found confirmation that yes, Mary Ellen is the daughter of Arthur and Ellen. In 1962, a crowd of relatives of Arthur McKenny, sell lot 814 (old lot 11). Lot 814 no longer exists, see the above photo fro 2004 of a vacant lot. The ‘crowd’ was Minnie B. McKenny Cook, a beneficiary of Arthur McKenny’s will, Ellen Cooper Evans, Everett L. Cooper, Inez G. Cooper (Everett’s wife),  Richard J. Evans (Ellen Cooper Evans’ husband). Ellen Cooper is Arthur’s granddaughter through Mary Ellen and David Cooper.

In 1930 the McKennys borrow $1500 from the Equitable Co-Operative Building Association using lot 814. Later that association becomes the Washington Loan and Trust Company. In 1958 the ‘crowd’ borrowed $3200 from Equitable Savings and Loan, which is now Riggs Bank. There were other loans in the 1940s using 1401 1st St NW.

Another lot was lot 820, old lot 2, which appears to be 1419 1st St NW, was sold in 1921. The McKennys sold the property to Jesse and Maggie Clark. I don’t think they were related and I’m not interested in looking up the Clark family history to find out because that would be exhausting.

In the 1920 Census Arthur was fairly old, 69 years old. So there was no occupation listed. In 1930, something must have happened. He was no longer living in a home that he owned. Instead, he was 78 years old, living nearby at 42A O St NW, with Ellen and his spinster daughter Minnie in a rented unit. He was working as a caretaker for a private family. Minnie, who in 1920  was a sales lady, was a 44 year old cafe worker in 1930.