The image below is a scan of a photocopy of a photograph of a row of Bates Street NW homes. The notation says it is the 100 block of Bates but that set of three 2nd floor bay windows in a row between two bay-less houses looks like 204 to 208 Bates Street NW. But I’m not 100% sure.

If I have the right block, it appears the original stairs were done away with.

So I made a photocopy of a photo and now I share it with you. There is nothing special about this alley, besides the fact that it is awfully trashy. There are other photographs and from the cars I’m guessing it is from the 1960s. But there was an image of a gentleman in a suit, which made me wonder if this could be from later. Dunno.

Another photo to break up the monotony of posts about the Washington Sanitary Improvement Co.’s sell off of their rental stock to people (followed by foreclosures). These images are from a pile of photocopies of photographs I found in an archive. I have in my collection, photocopies of photographs taken sometime maybe in the late 1960s, maybe 1970s of Bates St NW. The image above is looking South on 1st St NW from the corner of 1st and the 100 block of Bates St NW.

When I attempt to look at Google Street View, I notice the mail box is gone. The lamp post is further from the corner. And no fancy schmancy brick in the sidewalk.

At a point in time I photocopied some photographs of Bates Street NW. The better images will get their own post. I will dump the not so great ones here. They are from the National Archives and I think they are from the late 1960s. Maybe. There are a lot of WSIC sell off posts in the works and I figure that would get boring so I started digging around in the piles of stuff I have. I don’t think I posted these images from photos I photocopied.

The note I have for this image reads, ” Bates St NW. 100 blk facing East Northside to South.” I think these are from the 200 block. I don’t know what year these are from but I’d say sometime in the 1960s based on the cars parked on the street.

From my last post, I mentioned I would look at a property that was transfer from the Washington Sanitary Improvement Company (WSIC) to three men, who then sold it to a person marking the exit of WSIC from Truxton Circle in the 1950s.

I don’t have the exact date when WSIC came to posses 45 Bates and other homes on the block. In 1903 parties (George Sternberg and George Kober) involved with the Washington Sanitary Improvement Company (WSIC) owned many lots on Sq. 615. So fast forward to June 1950 and the property is transferred from WSIC to the Washington Loan & Trust Company, then from the Washington Loan and Trust Co. to business partners Nathaniel J. Taube, Nathan Levin and James B. Evans. The business partners borrowed $3 million dollars for Investors Diversified Services Inc. of Minnesota. 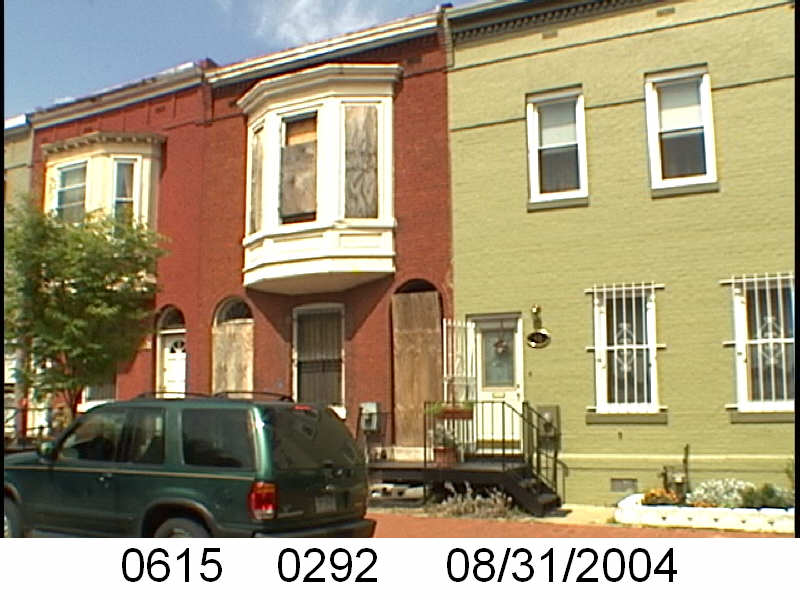 First Taube, Levin and Evans sell 45 Bates St NW to William W. Johnson and his wife Kathleen S. Johnson on January 26, 1951. But then there is a deed of the Taube, Evans and Levin selling lot 292 to George M. and Olivia V. Davis February 5, 1951. Later documents don’t seem to clear up the ownership. In 2001 DC Water and Sewer sent a water sewer lien to a Johnson and Davis. Loan documents appear to say the Davis and Johnsons both had a 1/2 interest in the property. Oh brother.

Since Johnson is a common name I was able to find some information about the Davis’. In the 1940 census there was a George M. Davis married to an Olivia V. (nee Birdsong) Davis living on the 2000 block of Flagler NW. They were listed as white. He was a painter, she was a maid in 1940. They lived with their 4 year old daughter his 87 year old widowed mother-in-law.

Funny thing. Looking at their marriage record from 1924, the couple was ‘colored’, not-white. In the 1930 census, the couple living in Stonewall, VA with George McKinley Davis’ father, is listed as being Black. Then in the 1950 census an Olivia V. Davis is the head of the household, living with her husband George Davis, the painter, at 2261 12th St NW. In 1950, they are Black. I would say the 1940 census was a fluke if it weren’t for other documents stating that George was white.

Who knows? Race could be considered a social construct, based on real phenotypes.Maybe they could pass. Or maybe there are a couple of George M.s married to Olivia V.s out there to confuse the matter.

I’m not sure where I’m going with this but I am looking at the end of the Washington Sanitary Improvement Company (WSIC). The end meaning when the company, or what the company turned into, exited from the history of Truxton Circle and sold off it’s properties.

I became aware of the sell off in a 1952 article in the February 13th Evening Star and a bunch of newspaper searches where their Truxton Circle properties were auctioned off in the early to mid-1950s. I shared one document in my post WSIC-1950 Big Old Property Transfer, where WSIC transferred their property to the Washington Loan and Trust Company. What I didn’t do is look at the next document (#1950024327) from the same day on June 16, 1950 transferred it from the Washington Loan and Trust Company to three fellows, Nathan Levin, James B. Evans, and Nathaniel J. Taube.

That same February 13, 1952 article mentions Levin, Evans and Taube (Tauber) buying some 850 properties from WSIC. In my next post I’ll look at one TC property sold to a regular person.

Around 1950 the Washington Sanitary Improvement Company, which owned several large blocks of property in Truxton Circle and parcels in other parts of Washington DC, sold off their holdings. The experiment of charitable capitalism had come to an end after half a century.

There are a whole lot of properties in this document. So I’m just going to leave this here and may expand on it later. As part of this WSIC series.

So flipping through some old photos, I found this old gem from  2005.