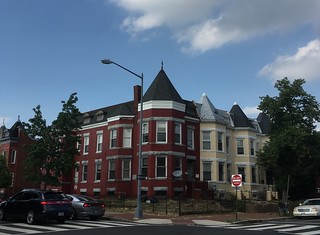 I ran into a neighbor who apparently went to the last BACA meeting. I stayed home because of a sick kid. He’s fine now, thanks for asking. Anyway, she informed me of what is going on with 319 R Street NW.

For those of you new to the story, here is the Cliff Notes version of the 319 R Street NW saga. The property was sold by a Korean Presbyterian church to a developer. The developer wanted to chop off the roof and turret and make a fugly building. There was some pushback by neighbors and the developers threatened to demolish the building as a matter of right. The developers, and other people, forgot that 319 was on a block built by celebrated developer Harry Wardman and a majority of the structures on the block were Harry Wardman originals. When it looked like the developers were going to be able to get their fugly building with a dunce hat of a turret, someone submitted a historic landmark application for the whole damned block. The submission and the approval meant no changes could be made, so no ugly 3rd floor or dunce hat, but unfortunately a bunch of innocent homeowners got caught up in it like dolphins in a tuna net.

The developers got permits to make changes (but not the fugly building) and plan to sell 319 R with the approved permits. They played chicken and they lost. Depending on how much they sell the building, a talented developer like Ditto could turn it into a two unit, million+ property.