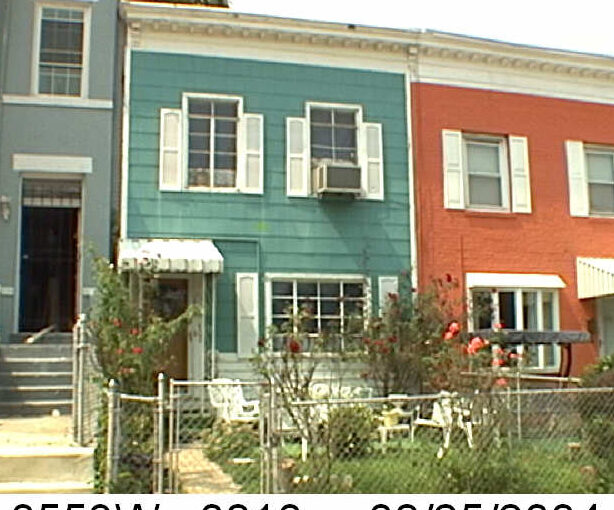 Well I’d like to thank Emil for spotting this on the rear of 1607 NJ Ave, NW, the house that may come crumbling down at any moment.
I’m a bit torn about this. I sort of feel badly because the family members have to deal with the death of a father and now this. But on the other hand, that alley isn’t that wide and even if this thing winds up crashing in the middle of the night it probably will take out the neighboring house, crush the fence across the alley and maybe send brick through the window of houses across the alley. Worse case scenario is that parts may come down on a kid running by.
What got me was the senior tax deduction for real estate, and normally I kind of like to wait several years after the person has died before complaining about it, but this house is a danger.
The best thing for everyone is for the family to get this through probate and sell it to some developer, who hopefully might fix this mess before it hurts someone. This vacant house, former church(?) is now on the market for $275K.
It is owned by the Tried Stone Church of Christ in SE Capitol Hill, and being taxed at the vacant rate the church owes about $20K in property taxes. Vacant on P
Originally uploaded by In Shaw

This morning coming back from Catania’s I came across an interesting happenstance. I was passing by 214 P Street, a vacant property I just recently blogged about on the 15th. Anyway, there were about 3 guys painting the top of it brown and gray and the windows were fixed.