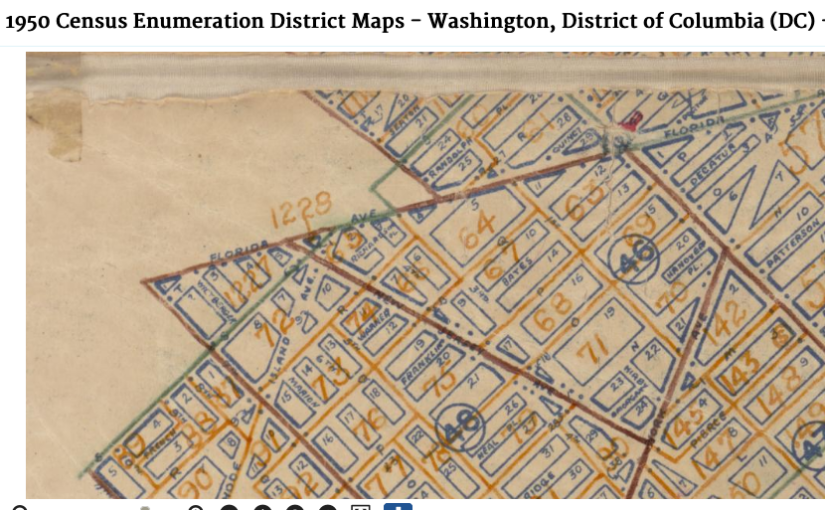 I have an idea. I would like to compare the land records I have been seeing in my series of Black Home Owners of Truxton Circle with that of white home owners. I would start with the 1930 census because that is when redlining starts. Also the DC Recorder of Deeds online records start around 1921, and I like having a buffer.

The 1950 Census the last and most recent open census, and that is where I’ll stop. Also after 1950 DC experienced white flight, particularly a loss of its white working class and poor. As of this time, the District does not have any white working class neighborhoods.

So I started looking for a 90-100% white comparison block. I was looking for something in Old City. I wanted something with an older housing stock, with row houses/ townhomes. To make it easier on me, no big blocks. I wanted to avoid blocks with large apartment buildings, so that eliminated most of Dupont Circle. Many Logan Circle blocks got kicked out of the running because many blocks did not remain 90%+ white by 1950. I really wanted to keep Shaw blocks finding 90%+ white blocks.

So here are my possible candidates:

So 980N got eliminated first because I couldn’t find the square on the Library of Congress map site. It seemed to have gotten left off and I need the real estate maps because lot numbers change.

Square 1255 in Georgetown is going to be set aside because the occupations I am seeing appear to be very upper middle class. The Truxton Circle block is more working class and I don’t want to compare it to a block that is more managerial and richer.

Squares 984, 966, and 765 are great contenders because they have several working class residents. There is the odd doctor on the block. Fair enough, 509E had a Dr.

Next, collect the info.