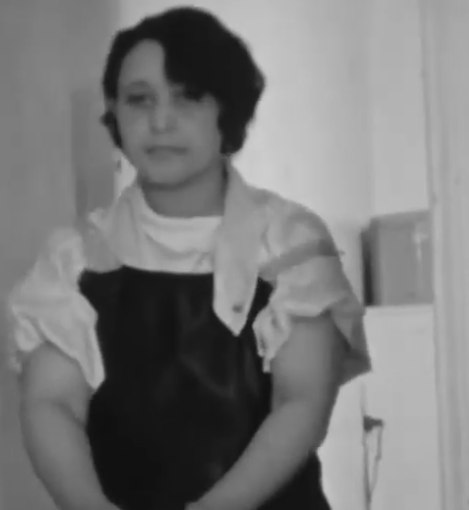 In a previous post we looked at filmmaker Eloyce Gist, in this post, she is Mayme K. Patrick-Gist. Same woman, but as a home owner.

Mayme Eloyce King was born in Galvaston County, Texas October 21, 1892 to Josephine Beavers and Walter Louis King, a farmer. She was the eldest of their seven children. In 1912 she gave birth to her daughter Homoiselle Vivian Patrick, the father was a library janitor, Roscoe C. Patrick. By the 1920 census, Mayme had moved to DC and was living as a roomer on 6th St and working as a hairdresser. In the 1930 census, she lived with 3 lodgers and listed her daughter as her 16 year old sister.

So let’s look at the story the Recorder of Deeds’ records tell about Mrs. King. The first record is from 1922, transferring the land from Carrie N. Mills to Walter L. King and his daughter Mayme King Patrick. The family, father, mother and adult daughter Mayme, borrowed $4,500 from trustees and $3,340 owed to Ms. Mills. I am loathed to look at the permits to see if they were building up a commercial building for her business. This was almost where R meets Florida Avenue and Sq. 551 was a commercial block.

Maybe her parents were just co-signers. In 1923 they transferred the property to her. She borrowed various amounts small and large, but mostly large during the 1920s from individual trustees. In 1934, papers revealed a name change (Mayme King Gist) and she began borrowing from an institution, $6,367.10 from the Home Owner’s Loan Corporation.

In 1932 she married James E. Gist in Philadelphia. Despite this, he does not show up in the land records. The 1940 census has a Arthur W. Gist listed as the head of 134 R St NW. They are both listed as photographers.

In 1939 she married a man 17 years her junior, Arthur Clifton Wood in Prince William County, VA.

There is no explanation of how or why her name changed once again to Mayme King Slaughter in 1953 documents. She married John William Slaughter in 1952, they separated a few years later, and eventually divorced in the 1970s. She is the sole entity mentioned in the records. No pesky husband gets attached to the records. She only used this name with one set of trustees, Ernest T and John H. Eiland, for loans in the early 1950s. Not sure what that was all about.

The last record for lot 167, is a loan from 1964 from trustees and here the trail ends for this lot.

Wandering back to one of several family trees on Ancestry.com, Mayme’s story ends in July 1974 in Atlantic City, NJ. Her daughter Homoiselle P. Harrison, died in the District of Columbia at the age of 87, January 18, 2000.

In the 1930 census, Charles B. Walker is listed as the head of household at 136 R St NW. Since this was on Square 551, his house sat near where the CaBi station by Florida Avenue Park currently sits. In the land records his house was on lot 166. His ownership is confirmed by the 1933-1934 General Assessment, where he and his wife Mary T. Walker are listed.

Who were the Walkers?

Charles Beverly Walker Jr. was born November 6, 1868 in Washington, DC to Charles B. and Ann C. Walker. In 1880, he was 11 years old and attending school and he lived with his parents and siblings at 343 F St SW (I-395 currently runs through where F St should be). His father was a store porter and his mother a laundress. In 1900 the Walkers were at 105 F St SW, and Charles began his career as a barber. He lived there with his parents, siblings, his wife Mary A. Taylor, and two of their children. In 1910 was living with his wife and their children Homezelle, Chester, Beatrice, and Thomas Walton at 107 F St SW, next door to his brother Thomas and their mother Anne, who were still at 105 F St SW. Their last census in SW DC was the 1920 census, where the 51 year old Charles continued working as a barber, Mary was a charwoman, and their adult daughter Homezelle was a teacher. They were living at 350 E St SW, with teenagers Beatrice and Thomas, along with mother Anne where they shared the building with another household.

He remained attached to his F St SW roots. In his April 17, 1956 obituary in the Evening Star, he was a deacon at the Zion Baptist Church at 337 F St SW, when he died at home on Saturday April 15. He may have been a member of the Oldest Inhabitants Inc, as they too had a death notice for Mr. Walker. He was a member and Past Master of Pythagoras Lodge No 9. FA&AM over 50 years. Upon his death he was survived by Mrs. Homezelle Carey (wife of Richard E. Carey) of New York, Chester A., Beatrice M. and Thomas W. Walker of the DC area. He was interred at Woodlawn Cemetery.

I was doing research for my Black home owners of Truxton Circle series and ‘eventually’ stumbled on a filmmaker. I spent all day researching Mrs. Gist as a property owner and right before retiring for bed, on a lark, I Googled her name, and discovered she made a few short religious films. There is a lot to share about her as a woman and a pioneering African American filmmaker that I am giving her a separate post under the name Eloyce Gist.

She was born Mayme Eloyce King on October 21, 1892 in Galveston County, TX. Her parents were Josephine Beavers and Walter Louis King, and she was the eldest of their seven (plus?) children.

According to an online biography, she married Roscoe C. Patrick in 1911. In 1912 Homoiselle Vivian Patrick was born.  She relocated, alone it appears, to Washington, DC in the 1920s. She appeared as a roomer at 1325 or 1525 10th St NW, working as a hairdresser at a beauty shop. In 1923, she first appears in the DC city directory as Mamie Patrick, hairdresser on 134 R St NW. She divorced Patrick in 1930.

In the 1930 census, she is listed as the owner of 134 R St NW, working as a beautician. Her daughter, Homoiselle, then 16, is listed as her sister.

In June of 1932 she married evangelical (she and her daughter were Bahá’í ) Christian James Gist in Pennsylvania. But they made movies together prior to their marriage.

The earliest known film was Hellbound Train in 1930. She and James are credited as co-directors and co-writers.

Film restorer Dr. Samuel Waymon explains the film better than I can in this Youtube link.

Their second known work from 1933, Verdict Not Guilty is, um, interesting. She and James Gist co-directed it, but she is the sole writer and is listed in IMDB as its one star.

Their last surviving film is Heaven-Bound Traveler from 1935. Eloyce played the Wife. I look at it and wonder if they shot this in their own Truxton home or on Truxton Streets? Hellbound Train looks like it was shot in LeDroit Park.

James E. Gist died December 12, 1937. It doesn’t appear that she made anymore films after her directing partner passed. Modern write ups mention that she went around playing these religious themed silent movies around town. However, I could only find 2 mentions in the Evening Star of her exhibiting the film. One mention was in the December 16, 1939 edition of the Evening Star of Mrs. Eloyce Giste showing Not Guilty at Metropolitan Wesley AMEZ church.

She did not remain a widow long and married projector operator, Arthur Clifton Wood, a man 17 years her junior. Gist was younger than her too. Wood was 22 years old, she was 39. They married December 12, 1939 in Prince William County Virginia. In the 1940 census, Arthur is listed as Arthur Gist, head of household and owner of 134 R St NW. It isn’t clear when the Wood marriage ended.

She married John William Slaughter in 1952. They divorced in 1972, but according to their Albermarle County, VA divorce certificate they separated in 1956.

I will do another post for Mrs. Mayme Eloyce King Patrick-Gist-Wood-Slaughter in May, as a home owner.

Whereas there were fewer dual entrance properties on the even side of the 200 block of Bates, the odd side had preserved more of them into the early 2000s.

Although it no longer had a second entrance, you can see evidence that there was a door under the window of 225 Bates Street NW.

A ‘positive’ of neighborhood disinvestment is that sometimes it works as a preservative. If structures manage not to get torn down, there is little incentive to modernize or gussy up the exterior. When gentrification hits, as it has, there is an incentive to add a third story or change the whole structure. I am thankful for the 2004 photos. It was the start of the 2nd wave of Shaw gentrification, but well before the million dollar houses started showing up. We can still see what the WSIC built and what managed to survive after 100 years.

I’m going to take a little break from WSIC. Just a little.

Most if not all of the WSIC properties were built with two flats, as they were intended to be rental properties, not homes for homeowners. Looking at many of the houses on even side of the 200 block of Bates, there is only one property that had two entrances still in 2004.

A peek at Google street view and 222 Bates St NW, which only had one entrance in 2004. It seems sometime around 2015, 222 Bates St became two condos, with two separate entrances. And it got a pop-up.

Another thing should note about all the Bates Street houses, from the unit block on Sq. 615 to the 200 on Sq. 552, is there is no yard. It very much like a lot of Baltimore row houses. One steps out their door and the sidewalk is right there. No need for a lawnmower.

A WSIC house has a particular style. There is the 2nd floor bay and there are the design details, sometimes two or three, near the top of the building over the windows.

If you remember from other WSIC posts, lot 25 owners were hold outs. 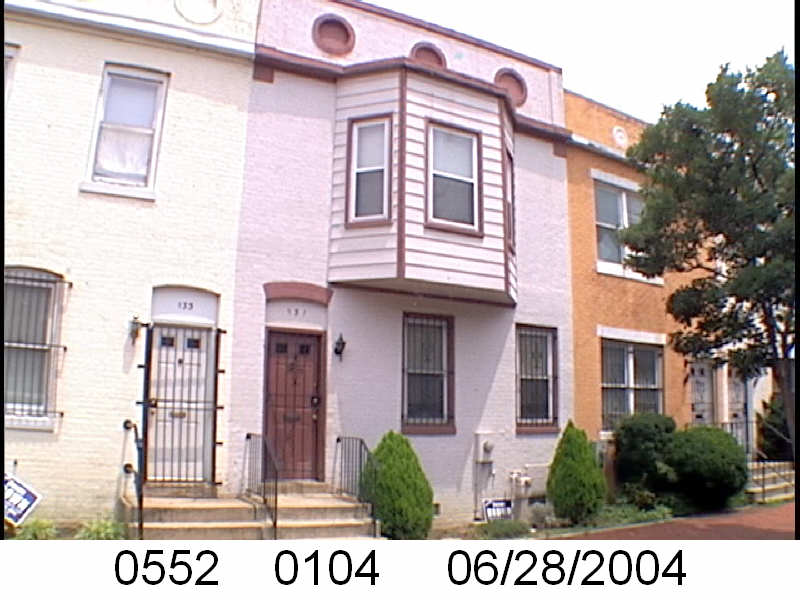 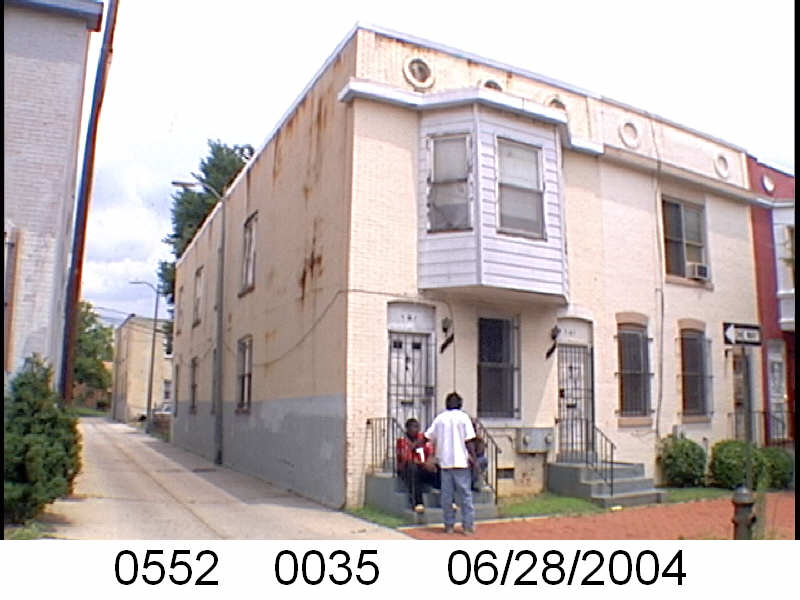 I should look into Mr. Walker, when I’m done with WSIC.

I feel I need to state that the images are from 2004. Truxton Circle was a little rough around the edges then. It’s been 18 years now and most of the properties have been renovated. Several homes that were vacant, are now someone’s home. So the images do not reflect their current state. Go on to Google Street View for that.

Several of the WSIC houses have the classic 2nd floor bay and or have the covered entryway.

There are several houses in this row that have kept their two door entries. I believe, and I will look into this later, that almost all the WSIC properties were originally built to house two or more households.

As seen with Q St and 3rd Street, the WSIC bookended their row with a bay that was two stories, as opposed to a 2nd floor bay. They did not do that with P Street.

The two ends of the WSIC row on P Street NW are not identical. 201 P St NW has something unusual, two entry doors, for the same property next to each other and covered. Typically, the two doors are separated by a window. Maybe this was done because of the alley? But if so, this is not replicated on Q St or on Bates. 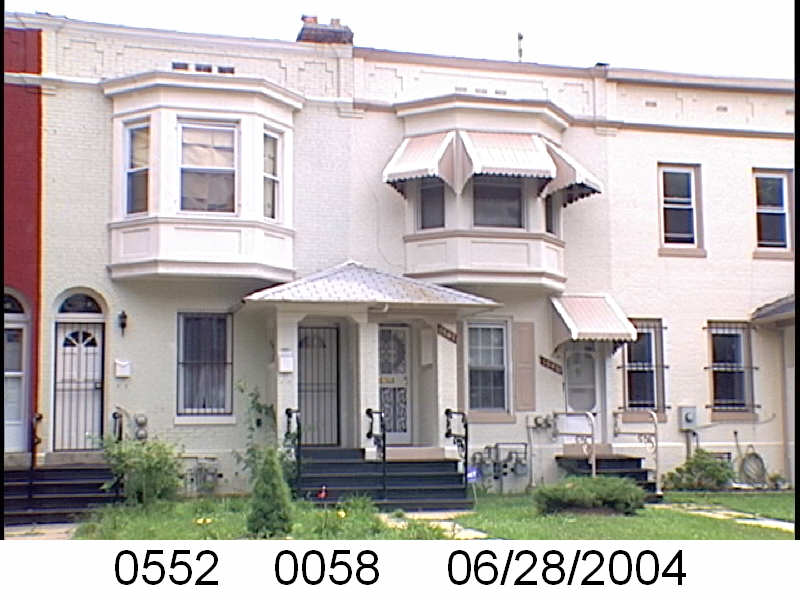 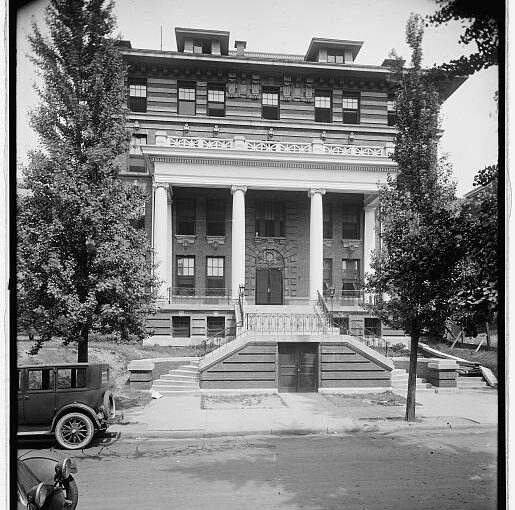 I tend to not write about institutions in Truxton Circle, mainly because I am interested in individuals and their stories. But a recent ‘discussion’ with a co-worker, homeopathy came up, which I saw a great excuse to mention the National Homeopathic Hospital. There’s a 2009 post with comments from people who had a connection with the hospital. The hospital sat at Kirby/2nd St NW and N St NW.

I have nothing new to write about the Homeopathic Hospital, but I have images from the Library of Congress: 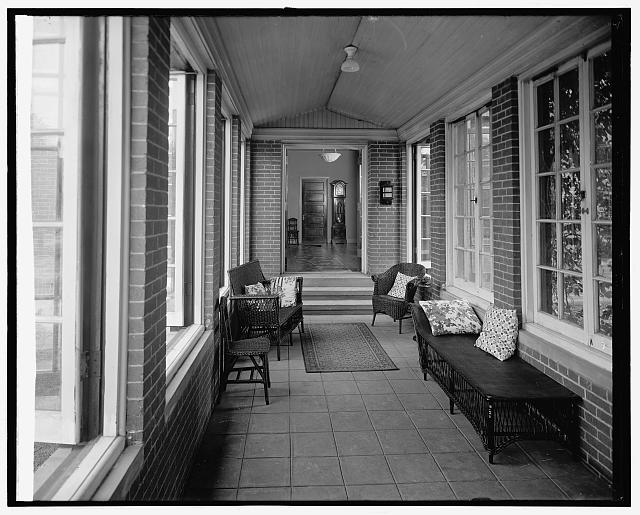 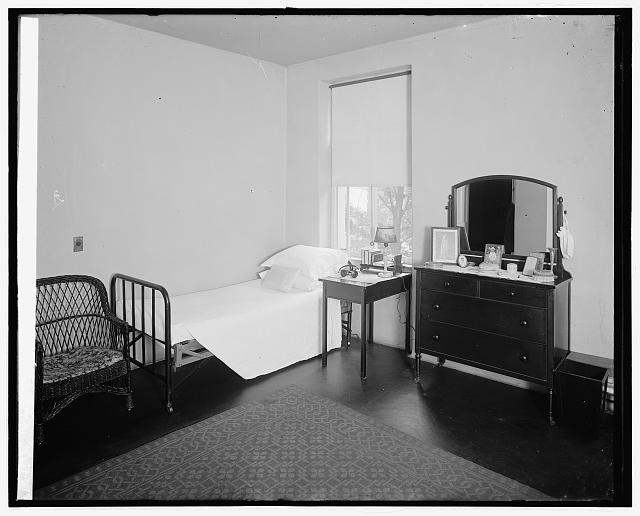