For the past couple of weeks I’ve been fooling around with DC Public School (DCPS) and DC Charter School data. Now for my childless friends there are reasons to be nominally aware of what’s going on with DC schools. If you’re in a sought after boundary you could sell your house for more than a similar house just on the other side of the boundary (ex. Deal Middle School). If you have friends or neighbors you like (or don’t like) with kids, schools can mean they stay or go. Your neighborhood can get clogged with SUV driving parents dropping kids off or swarms of teens converging on your neighborhood metro station. For neighborhood policy wonks schools can mean keeping a middle-class tax base from automatically heading to the burbs.

So let me start with some definitions and categories. In-boundary– aka school catchment area, school attendance boundary or zone is a geographic area determining which school kids are assigned. What I’d call magnet schools, DCPS calls city-wide schools. Then there are the selective high schools like Duke Ellington and McKinley Tech. Outside DCPS there are charter schools, a bunch of independent schools, of varying quality, that are free for District of Columbia students.

Anyway, the DC Policy Center has a really cool graphic regarding in-boundary schools on one of their blog posts about in-boundary and charter schools. I have strong negative feelings about their real estate related papers, but regardless, they have very nice graphics. 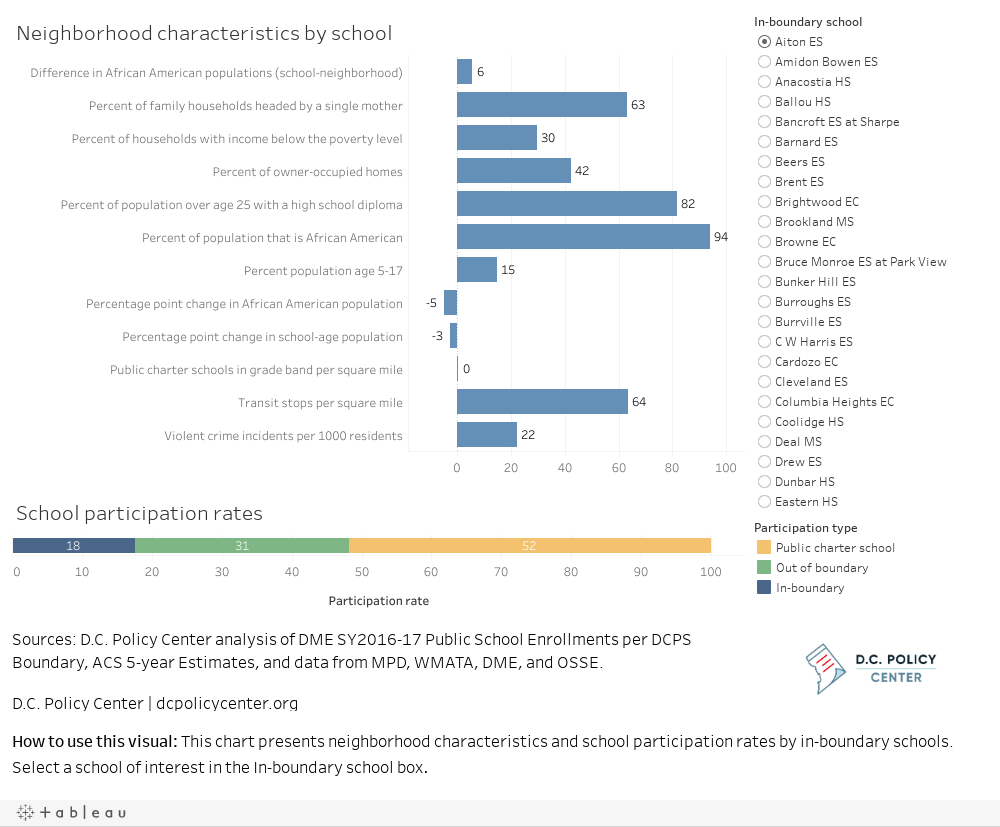 I was having fun but noticed the data was from 2016-2017, so I went hunting for newer data and found a bunch of ‘fun’ Excel files.

If you really want to know peoples’ values, look at what they do, and that’s been fascinating.

For school year 2017-2018 there were only 4 schools (all elementary) where over 90% of the students attended their in-boundary school. Deal Middle School, the school Mayor Bowser referred to when promising Deal for All, only had 78.9% of the students in the boundary. Deal is also the largest middle school in the city. It is more than three times as big as the next biggest middle school and twice as big as most education campuses, which mix middle and high schools. But abut 20% of students who could go to Deal, the best DCPS middle school, their parents decided, “nah, we’ll pass.”

What’s up with that?

I was having fun looking at the percentages of different schools from the DC Policy Center data and then looking at the 2017-18 Public School Enrollments per DCPS excel sheet. The weirdest thing, I thought, was with schools where a majority of the students came from the boundary but most of the kids in the boundary went to other schools. And those other schools weren’t necessarily charters. It’s like parents saying, “we believe in public schools, just not the one we’re assigned.” And when some lose the school lottery, they move.

The neighborhood school would be the in-boundary school, not necessarily the nearest school. Looking at the excel sheet I mentioned above, if 10 or more students attended a public (DCPS/charter) school other their in-boundary school it was listed. There are some kids in the Seaton boundary going to Cleveland and Garrison elementary. But those are only about a dozen or so kids per school. In the Dunbar boundary, a chunk (total Dunbar enrollment 617) of 128 attended McKinley Tech and 109 attend Wilson. McKinley isn’t that far (by bike) from Dunbar and from what I can tell a huge chunk of kids in the Dunbar boundary make up the student body (128 out of 620). Considering the huge portion of Ward 5 Dunbar’s boundary consists of, McKinley might be closer, since it is further east. Also considering Ward 5 is served more by the red line, you may as well stay on the train for a Wilson, in the middle of the Van Ness and Friendship Heights stations at Tenleytown. 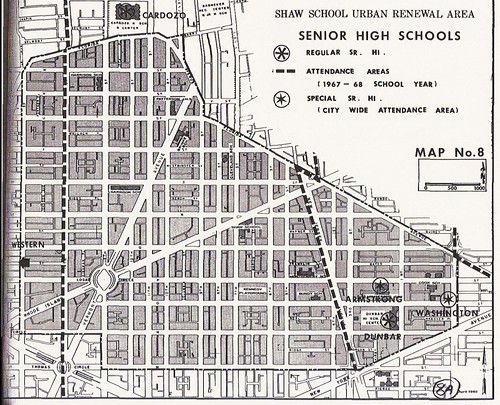 Sorry this is not a prettier map.

The Model Inner City Community Organization (MICCO) it appears suggested the path through Shaw the WMATA subway sorta- kinda takes. As we know the Shaw metro station isn’t at 7th and Florida, but rather a block down at 7th and S and 7th and R. The Mt. Vernon Square station, isn’t at 7th and O, but also a couple of blocks off at 7th and M. WMATA at that time, proposed the line (did it even have a color in 1968?) going up 13th Street, with a station just off Logan Circle, and the U St station sort of where the U Street station is now.

Anyway. I tried posting some Shaw history about building and growth in the post-riot, pre-non-stop gentrification period. This was based on countering a poor gentrification think piece that claimed that you could count the building projects in DC between 1968-1998 on one hand. Actually, you can count at least a dozen building projects in Shaw during that period, the Green/Yellow line, just one of many projects in Shaw. According to the wikis U Street, Shaw, and Mount Vernon Square all opened up in 1991, twenty three years after the riots. However, it wasn’t all that great in the 1990s because the Green line stopped at U Street. It would be almost 10 years before the line was as lovely and functional as it is today. I will spare you the stories of having to switch at Gallery Place & Ft. Totten to get to Greenbelt.

I’m sure the 14th Street crowd would have wished for the WMATA plan. However I’m very glad the decision to place the stations a little bit more to the east was chosen. Considering there was a significant amount of damage along 7th Street, I do wonder if the riots helped make 7th Street more attractive (cheaper land, fewer historical buildings to damage) to WMATA?

So the Post has another feel bad about gentrification opinion piece that appeared in Sunday’s print version but has been on-line for several days. Reading “Poverty is Moving to the Suburbs but the On Poverty Didn’t“, I almost think the author is trying to argue that poor suburbanites should use DC resources.

My ire burns and seethes every time I see a car with Maryland tags drop off a kid in front of a DC charter school. If Maryland parents like DC charters so damned much they should fight for tons of them in Maryland. It’s not just schools, it’s other services that DC taxpayers support and Maryland citizens, who have the privilege of a vote in both houses of Congress, something DC voters lack. It does not help that many DC government workers live in the suburbs, it may have them forgetting about boundaries. In some cases, boundaries don’t or can’t matter, like foster care* and libraries**. I’m not against co-operation between the Districts and the burbs, but like WMATA, the costs need to be shared.

Or/and suburban areas need to step up. Where they can’t do it themselves, they need to partner with the District or other suburban where it makes sense. But Maryland or Virginia residents using DC agencies as if they were DC residents is wrong. The suburbs have something to offer DC, there are welding classes out there, but not here. We can all help each other out, but each government needs to be accountable to and responsible for their own citizens.

*There are many DC kids with Maryland foster families.

**Some systems allow for people who work in the area to apply for cards and privileges.

So this comes up way too often. So that’s why I decided with this re-boot (messy as it is) that I would call the In Shaw blog Truxton is in Shaw, because it is.

Here is the quick and dirty and maybe in later posts I’ll go deeper.

Shaw. I have yet, to find ANYTHING, anything calling the area we know as Shaw as “Shaw” prior to the late 1950s, and even then it was called the Shaw School Urban Renewal Area. See the map there? That is of the Shaw School Urban Renewal Area. Everything in it, is Shaw. The area known as U Street, you will see it, in Shaw. The portion known as Logan Circle, you can find it in the map, in Shaw.

Truxton Circle, look at the map, it is IN SHAW.

If it is in this map, it is in Shaw, which kinda stopped being a thing sometime after Home Rule and wards were a thing.