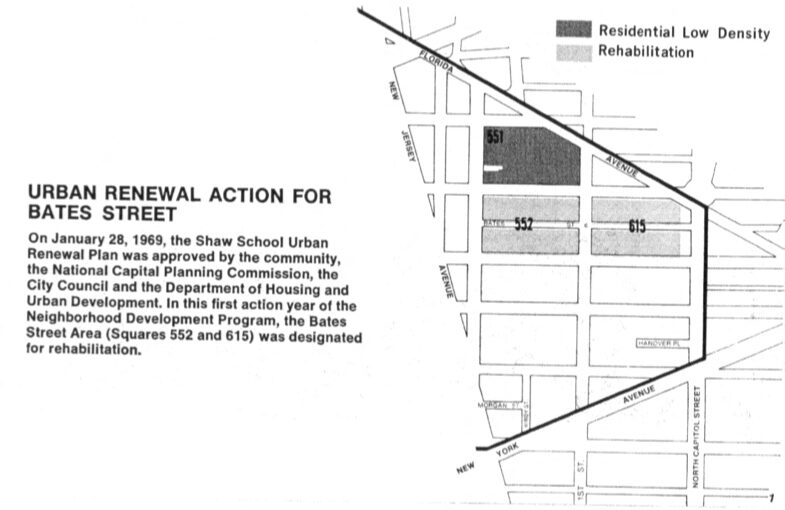 This is the 3rd version of this post because I realized that the images did not transfer when I moved this from a Blogger environment to WordPress. So the links did not work. This post aims to fix that.

Although this does not mention the Washington Sanitary Improvement Company, it is about the houses the WSIC built, plus another block. Below is a 2008 post where I misremembered the name of the 1968 report, which I have below the fold. The report, A Program for Bates Street, is just 12 pages with a few pictures of residents, has mentions of rehabilitation and new construction.  Fast forward, this was under Marion Barry’s tenure so it got halfway done.

I have the 1968-1974 (the dates I’m unsure of) brochure of “A Plan for Bates Street” in PDF form. It’s a big file and because it is so large, I’m not posting here. However, I will mail it to folks who ask (offer expires in 30 days). Basically, like the title says, it was the government’s plan for the two blocks of Bates, to improve the housing.

A Program for Bates St 1968 by Mm Inshaw on Scribd

Houses on Bates Street (well the houses on Bates I’ve been in) are deep and some of them are divided into two units. It seems that when they were initially built by Washington Sanitary Housing (or Washington Sanitary Improvement, I’m still working on the facts of this), they may have all been two unit structures. You can see it in the placement of windows and doors.
Truxton Circle have a few pictures from the brochure. This first one shows the street plan for squares 552 & 615.

It appears there was the intention to remove some structures for the creation of small parks, a tot lot, a teen lot and parking. Spaces for adults apparently were to be carved out of existing space. The second picture, shows a typical Bates Street house prior to any renovation. The first and second floor are two separate units with their own living rooms and kitchens. The plan was to combine the two to make one unit, replace 2nd unit doors with windows, move the kitchen to the 1st floor center, and create more bedrooms, going from 1 to 3 or 4, as seen here. Looking around Bates Street now, there seem to be fewer 2 unit houses than 1 units.