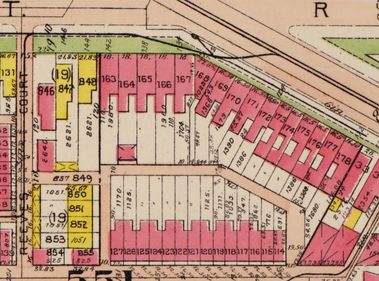 I’m going to peck at 1930 Black home owners in Truxton Circle. There will probably be a lot of 1920 overlap, so I won’t go at this too hard. It’s something to do between Washington Sanitary Imp. Co. posts.

Looking one census back to the 1920 census, Mary Jane Poole was living at 1807 12th St NW. She was listed as the sister-in-law of William Smith, who we will see later in this post. She lived with William and his daughter Alma Smith. They were in the same house (current building has an English basement) as Charles and Maria Young. So at some point, the ladies Mary, Maria, and Alma moved on over to 138 R St NW.

The land records start in 1921 and the owner in 1922 was widower named William R. Smith. In November of 1922 William Smith married Corine A. Ashton. She appeared on a 1923 trust as Corine A. Smith where they borrowed $7000 from the Oriental Building Association. Did this new wife have anything to do with Mary, Maria and Alma’s moving? There are more documents but later in 1923 the Smiths transfer the property to Fritz and Florence Alexander, who then immediately transfer the property to William R. Smith, Maria/Marie A. Young, and Mary Jane Poole in September 1923. That same day this group and Corrine, borrow money twice.

In October 1926 something happened and the court and a sale was forced and Mary Jane Poole purchased the property from Maria A. Young in a trustees deed. It’s not good for too many people owning a piece of property. But the rest of the documents following this it appears that William R. Smith quietly disappeared after this and does not appear in any following documents.

July 8, 1950 she transferred the property to Elsie Taylor Jefferson who immediately transferred it to Alma S. Cornish (formerly Alma Smith?), Henry A. Cornish and Ms. Poole. Once again, too many people owning the property. Well it didn’t last long because Mary Jane Poole died the next year on December 9, 1951.

In 1972 Alma and Henry sold the property to the DC Redevelopment Land Agency for $19,800. And now it is part of the Florida Avenue park.