A minor irritation I have with some essays on gentrification and housing is a complete failure to acknowledge investment and disinvestment in physical structures. 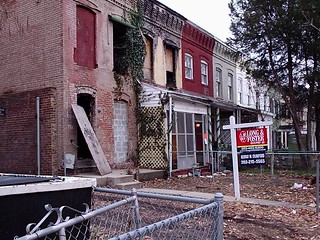 When someone takes this house and other houses in the neighborhood and just sees prices, what are they thinking? Do they think the rise in price is just arbitrary and an effort to keep lower-income households priced out?

What I witnessed was investment coming into the neighborhood. That house in 2003-2004 was a shell, unfit for human habitation. That was a result of disinvestment when it wasn’t worth it for the owner to maintain the structure.  Shaw had experienced a lot of disinvestment. After the riots in 1968, many businesses didn’t return. Some residents and landlords just abandoned the neighborhood because it wasn’t worth the money to them to fix the damage.

To take a shell from being unfit to being desirable takes capital, investment. Someone paid to buy cabinetry, flooring, windows, paint, drywall, electrical wires, PVC pipes, HVAC system, framing, appliances, and a roof. Plus the labor to install these things. Having renovated my house and another property, I can say this is not cheap. At the very least $100K went into making the house livable.

Well the house was already renovated by 2007, can I justify the $300K-$400K price hike between 2007 and 2019? I can’t tell if the rear deck was already there, but it was the neighborhood that changed in the period that made it more valuable. What happened between 2007 and now? Big Bear, a few blocks away opened up. Then the Bloomingdale Farmers Market about a year later. Nightly gunshots became less of a thing. There are a handful of sit down restaurants within walking distance, 3 that have had or have Michelin mentions. Two with 1 Michelin star within, biking…longer walking distance. Also, other houses in the neighborhood have been renovated and owners have a financial incentive to maintain their properties. But does that justify the price increase? How much is a safer (2019 TC is way safer than 2004 TC) neighborhood worth? How much is it worth to have places to take friends/dates that are a nice stroll back to your place? Schools have improved, and as a parent, it is worth a few thousand to have a plethora of Pre-K choices in walking distance.  As a homeowner, there is a disappointing difference between what you can refinance and what is a possible sales price. The improvements in the neighborhood have allowed us to refinance the house to fix it up, but the value to bank says the house is worth was much, much lower than what was selling around us. But all that is meaningless if all you care about is keeping the price of housing down.