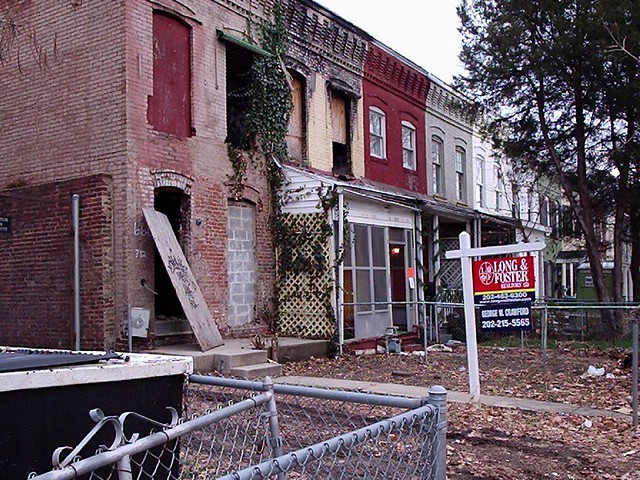 This is an old photo, probably from 2003, but I’m not sure, of 1508-1514 3rd Street NW. Those houses all boarded up in the photo now have real windows and doors and people. As you can probably see and guess, no one was displaced in the revitalization of those vacant houses. Guess what Shaw had a lot of back in the late 1990s and early 2000s…. boarded up nasty vacant houses.

This photo is from the “good old days” or the end of the “good old days” in Shaw. These are the “good old days” I guess some people are getting nostalgic about. It seems to be the same nostalgia that people in New York have about the old Times Square, back when it was filled with hookers, muggers and peep shows. I would like to remind you that the good old days, no one would deliver food to the house, you almost had to trick cabbies to drive you home and the local businesses were greasy carry outs, hair salons, dirty liquor stores, and unlicensed independent corner pharmaceutical distributors. Back in 2003 we would have killed to have a $30+ entree sit down restaurant to bitch about.

But it is 2017 and we have the luxury of complaining because we are hot stuff, for now. Who knows if there will be another middle class flight from the cities? It has happened before, it could happen again. Mansions have been split up to become rooming houses, and later rehabbed to become condos. History has taught me the good times do not last forever, neither do the bad.

Yes, those vacants in the photo above ‘might’ have been affordable to buy. Might, depending on the level of work needed to make them safe and livable. Might, depending on the dependability and skill of the contractor and the workmen. Might, provided it wasn’t a lead encrusted, termite riddled, pile of crumbly bricks with jerry rigged wiring and asbestos lined pipes. ‘Cause fixing that stuff costs money.