There will be a BACA meeting Monday July 10th to discuss 319 R Street among other things. There was no meeting July 3rd because of the 4th.

So the ANC sent the developers (Fred Schnider Investment Group) proposal to her residents and looking at the plans, Plan A has a 3rd story, no turret. Plan B has the turret.

I was hoping for something like 1721 4th Street where the turret was incorporated into the 3rd floor. 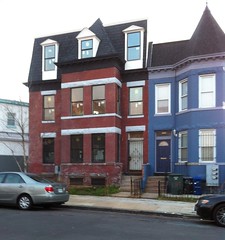 Also Plan B would have them destroying the old turret and us hoping that they bother to rebuild the odd little hat of a turret to go back on.

The other problem, I’m just now noticing is how it looks against the adjoining buildings. Currently three of the other houses along R Street NW are vacant investments gone bad. So there isn’t anyone in those buildings to cry foul. The transition from 319 to 317 is abrupt.

I might suggest a bit of a mansard like roof, with an opening for a deck, and the rooftop space on top. It would mean fewer windows on the top corner. But it could also make the transition from 319 to 317 less obvious and make the 3rd floor with the roof top entrance look less like a pop up.