The last section of Derek Hyra’s book Race, Class and Politics in the Cappuccino City are just two chapters, seven and eight.  There isn’t much to add than what I’ve already wrote on the previous two sections, except for some minor disagreements with the author. My major problems were in Part II.

The minor disagreements are in regards to what is and who is missing. For Truxton Circle at least there was a spike in the growth of “Other,” people who were not exclusively Black or exclusively White, these people are missing. So are middle class African Americans. Gen X and Baby Boomers aren’t players in this book either, though both made the neighborhood more palatable for the Millennials (born between 1980-2000 according to Hyra) who are all over the damned place now.

I understand an author, especially when you’re not writing a huge tome, has to be exclusive in choosing what and what not to write about. It just appears to me that some things were left out because they didn’t fit or did not support the author’s thesis. Yes, the new residents fought for dog parks, but they also fought to improve people parks too, something that isn’t explored. 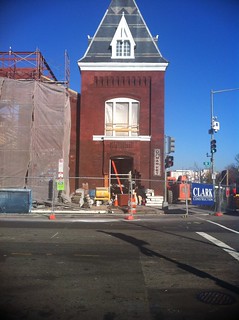 Lastly. Hyra in his last chapter mentions , “Neutral ‘third spaces’ may facilitate the development of bridging social capital.” Yes,  agreed, however we get back to what is not mentioned. Places like Ben’s Chili Bowl and Busboy’s & Poet’s are mentioned but I think the author is blinded by appearances. There are places in Shaw that have something for everyone, one place being the O Street Giant, ’cause everyone has to get groceries. I have never eaten at Busboys & Poets and have been to Ben’s less than a handful of times in my 17 years of living here, but I’ve been to the Giant hundreds of times. The story of the O Street Giant transforming from the Ghetto Giant to the Gentrified Giant is an interesting one, not explored in this book. I have seen my neighbors there, I’ve seen my fellow parishioners there. It serves the people buying grass fed beef with a black card and those buying family pack chicken with an EBT.  The Giant is truly an inclusive third space. Instead he, and various other writers like to write up how horrible or exclusionary coffee shops, $12 cocktail and $30+ entree restaurants, restaurants & coffee shops that did not exist 15 years ago, some not even 5-10 years ago, are.

One thought on “Problems with Derek Hyra Book: Part III What Does It All Mean”