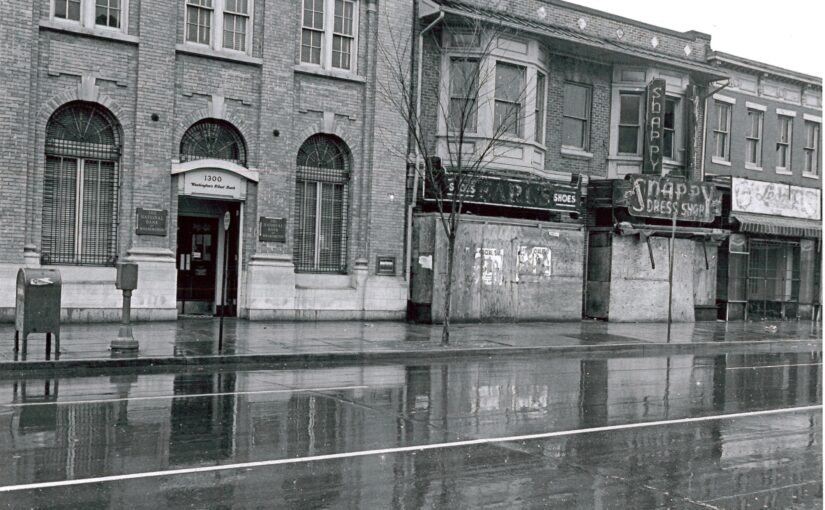 There is a saying, that those who do not learn from history are doomed to repeat it. And then there is another saying, “This time it’s different.” Both can be true.

In 1968 Shaw, and some other areas, experienced an uprising, a riot, a civil disturbance, or whatever you choose to call it. Buildings were burnt out, stores were looted, windows were broken and it took 30 years for the neighborhood to come back.

I am concerned about the neighborhood and what may happen after Election Day. I’ve been predicting presidential elections correctly since I was 10. Y’all ain’t gonna like the results, so I’m taking Desctructo-kid and hanging out with friends in the boonies of Maryland for a while. I could be wrong. If so, it’s a little vacation. [UPDATE 11/9/20. It looks like my prediction streak hit a snag. Well as long as the people are happy, so be it.]

Our block fared okay in 1968. It should be okay. However in 1968 businesses on the corner of New Jersey and Rhode Island were damaged.

Most of the damage Shaw experienced in 1968 were along her commercial corridors along 14th, 9th, and 7th Streets. Black businesses were hit as well as white and Asian businesses and property.

The destruction brought neither justice or peace. It did hasten building public and affordable housing because it also made neighborhood property cheaper. The thing with urban renewal is that the government buying the property gets to value to the property. And in minority areas, the government doesn’t pay top dollar.

Yes, this time it is different. Shaw isn’t a slum. But this time there are struggling businesses on the edge, as there was in 1968. COVID-19 has made it a sad Darwinist contest of survival of the fittest businesses. I just hope we never see the days of burned out husks of buildings and rows of empty storefronts again.