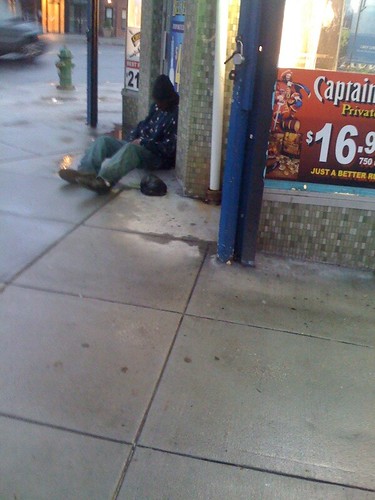 Not everyday a lot but more than other citizens it seems. I call when the guys selling heroin on the corner contain too many guys or the odd child (bring your children to work day!). I call when I witness an accident. I call when I see domestic abuse playing itself out in public spaces. And in recent days I call when I find someone in my residential neighborhood passed out, semi-passed out or exhibiting irrational behavior on the sidewalk.

Now, I tend not to do this for people in commercial areas or in front of stores, like the gentleman in the photo. I did once for an old guy who wanted to lay down in the street at 7th & P St NW. If he stayed in the street a cabbie or someone not paying attention might have run over his feet when making a quick right on to P. People passed out or experiencing problems in less traveled areas are more unusual and deserve attention. People passed out in the usual areas, I ignore.

So you find someone passed out or not particularly lucid on the sidewalk near your townhome, nowhere near a store, church or park, what do you do? Call 911. They are going to ask a lot of questions. Figure out what address you’re closest to. Decide if the situation needs police or EMS or both. I tend to go with just EMS unless the person seems violent. Figure out if the person is breathing. If you can, stay with the person until the EMS show up.

I can’t say if I’m seeing more passed out or about to pass out people because of the opioid epidemic. They aren’t crack heads, crack heads were a little different. They aren’t drunks, that, I can smell that difference. Something is going on, but I don’t know what.