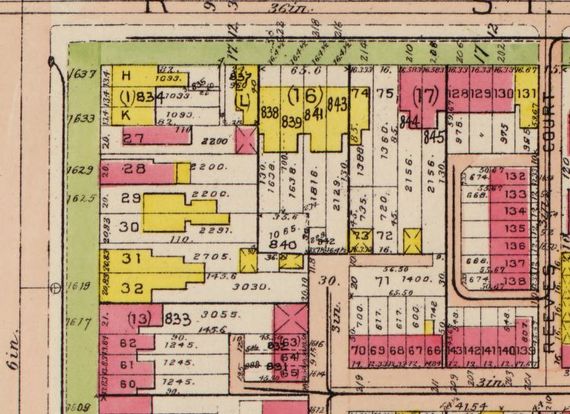 In the 1920 census Jerome Jenkyns was listed as the owner of 1629 3rd St NW. He lived there with his wife Ellena, their two sons and a 83 year old lodger, Mary Ann Fletcher.

Jerome Sanna Jenkyns (Jenkins) was born March 10, 1879 in Washington, DC. In 1900 he lived with his adopted father Horace Mandoon and mother (?) Matilda and other relatives at 406 4th St NW. At that time he was 21 years old and attending school. He married Ellena Hawkins in 1906. Their first son Jerome Carlyle Jenkyns was born a few years later in 1910, and in 1913 Ernest Sanna Jenkyns. During WWI he worked as a Monotype Casting Machine Operator for the Government Printing Office. In 1930 Jerome was a chiropractor. But in 1940 he was back to working as a Machine operator.

In the land records there wasn’t a whole lot of action. The first documents are from 1922 (please note the on-line records start around 1921) where Frederick L. and Marie T. Aue transferred the property (0551: 0028) to Jerome and Ellena Jenkyns. The Aue’s had owned the property back in 1911, so if they had an earlier arrangement with the Jenkyns it is not recognized in the paperwork. In November 1922 the Jenkyns obtained the property then took out a loan from the Northern Liberty Building Association. It appears the loan was for stock worth $1,500. That loan was repaid (release) in 1945. The last document was a 1972 deed with the Jenkyns sons selling the property to the DC Redevelopment Land Agency (RLA). That deed listed Earnest S. Jenkyns and his wife Ethel and unmarried Jerome C. Jenkyns as the sellers.