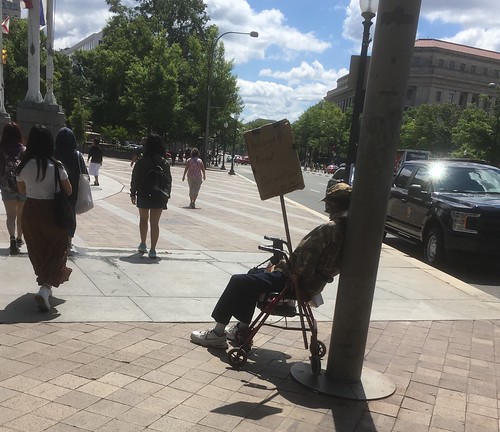 I’m writing this post to acknowledge that when I observe my neighbors and fellow citizens, talking about their wealth or lack thereof is at best a guessing game. I hesitate to talk about the ‘suspected’ homeless guys who hang out all year, near where I work, because I don’t know if they are homeless. They don’t have a shopping cart of stuff and they appear cleaner than some of the ragged tourists who march around. It’s just that they hang out in the same spot day after day, winter, spring. summer, and fall, during work hours and occasionally one guy will whip out a cup with some change and shake it. There are all sorts of signs that strongly signal that they are homeless, but to my knowledge few to none have self identified themselves as such. So when I question and analyze my presumptions, I’ll say I’m about 80% sure. Because honestly, taking in their ages 1/2 of them, and they are doing what my retired uncle is doing, sitting around and staying out of Aunt M.’s way. They could be the same.
There are things about our neighbors that point in this, that and the other direction as to which is their economic class. Because we are not privy to that which, frankly is none of our business, our guesses about whether someone is a member of the underclass, the overwhelmed middle class, or wealthy is just that, a guess. Unless they tell us.
I guess this comes from some people watching I was doing.