This is a continuation of the previous post about the three meal package offered by Rose’s at Home. This part is about the two other meals included in the package. 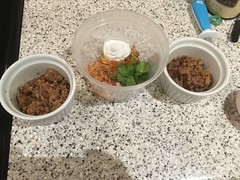 This is the meal with the famous Lychee salad, which has been one of the things I looked forward to on any visit to Rose’s Luxury. It’s not too hot (spicy) but has enough of a kick to be interesting. It’s got cilantro, if you’re one of those people with the genetic problem with cilantro. This was so good it was not shared with our 2.5 year old. 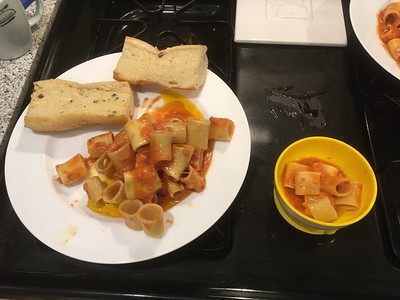 Destructo-kid did get the rigatoni and garlic bread. Which were low key and fine. Parts were al dente, which the toddler hated, and other parts were soft-ish pasta. When plating it, it was very saucy. Sometimes pasta with red sauce is not a wow dish, but it was filling.

Lastly, for this meal dessert was a cookie. Of course the cookie got heated. Everyone has their own idea of the perfect chocolate chip cookie. My spouse is an odd ball who likes his desserts frozen. And in this situation, he was able to have the cookie just the way he liked it.

The spouse and the toddler did not care for the carrots. 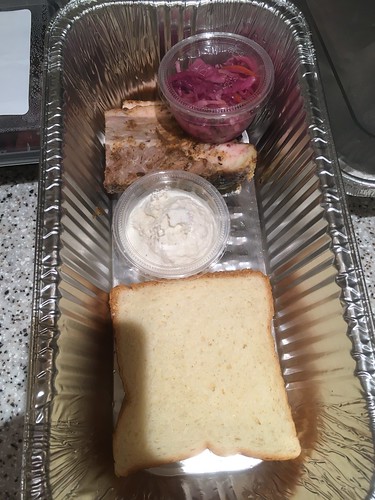 We all really enjoyed the brisket and not having had horseradish before it was amazing. It was so good I wished there was more. This was a dish that required an oven. I put it in a little longer than recommended because the heating instructions from Meal #2 made me wonder if our oven wasn’t hot enough. As a result, the brisket was perfection and the bread was a little crispy. That was fine since we’re not fans of really soft white bread.

The toddler didn’t get any brisket. He had his own meal, but he did get the white bread. He didn’t eat all the bread. He was not interested in the slaw and I already mentioned the carrots.

The tart was nice. Once again my spouse had his dessert frozen the way he liked it, which made the truffle whipped cream a projectile when he tried to split it with his fork. I enjoyed a room temperature tart with a glass of Costco’s best red wine.

Trying to plan out dinner for the next week, I realize part of the value of the 3 night plan was the luxury of not thinking about what to cook for 3 nights. We’re both working from home and at times, with a high energy toddler running around (he doesn’t run 24/7, sometimes he naps & there is the electronic babysitter). It also allowed us to get to bed earlier because there were fewer dishes and no pots and pans to clean up. So I’m thinking of looking for places that offer a couple of nights food.

Knowing that delivery services Caviar, Seamless, and the like are taking huge portions of the bill I will stick with places like Rose’s at Home that do their own delivery. That or pick it up myself. That way the restaurant gets to keep the profit and hopefully remain alive for one more day.

So who to do next? I probably should do Kinship but I can’t tell how much anything would cost. The Dabney is a short bike ride away. I like fixed price menus.