My pictures will never do justice to the plating inside the take out containers. Nor will the pictures convey the awesomeness of the flavor and the goodness and the everything. And my mind is blowing at the thought that you could get a Dabney meal and also pick up some cocktail happiness at the Columbia Room in the same friggin alley. Usually that much fun in an alley is illegal. 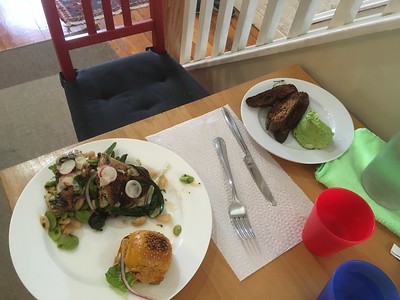 The catfish sandwich slider was wonderfully good. It was just right with crispiness and the things (pickles, etc) that make it so right.

My spouse had the crostini and I had the salad. I could have made the salad better my getting an even coating of dressing (packed on the side) on the salad, but chose not to. It was fine with the globs I dumped on to it. My beloved spouse is not a fancy food man. So when I asked about the crostini he said, it was crunchy. I had several forkfuls of the pea mixture and it was very good. I enjoyed the slivers of ham.

Since our toddler was dead asleep, we ate immediately after I came home with the food. So the chicken was nice and warm. I think I should talk about the pick up process. I picked the 4:30PM pick up time because the other option was really late and since I was going to be on a bike, I wanted to be able to see on my way back home. So 4:30 wasn’t the time I picked up our meal. It was the time I stood in line. I was either the 2nd or third person, waiting 6 ft behind.  While I waited there were people arriving in vehicles, and waiting in vehicles. There really wasn’t a lot of room in the alley for the cars that were there. The wait wasn’t long at all, maybe 2-3 minutes from standing in line to waiting 6 ft+ from the bar, to  grabbing my bag.

Anyway, the chicken was still warm and I managed to figure out how it was supposed to look on a plate. So I removed the chicken, put it to the side and placed the beans and ramps on a warm plate, then placed the chicken on top. It was tender and delicious. Because we were at home, we could pick up the boned chicken with our hands and gnaw at it. 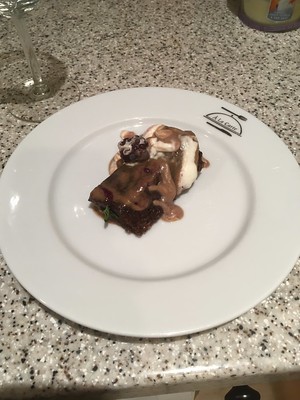 All in all it was $117, which is the meal, plus taxes and 20% gratuity. There is an option to add wine to the meal, but I live with a 2 year old and a teetotaler, so I opted for the InShaw house white and house red. I’d say what they are but I wouldn’t want some sommelier to touch their face facepalming. Let’s say they are both from Costco and I enjoy them.

Who is better, Rose’s at Home or the Dabney? Hard to say. I really liked the food and the need not to think about what’s for dinner for the three days we had the Rose’s at Home meals. But flavor-wise, the Dabney was impressive. It’s almost a tie, but Rose’s kinda wins.

Okay so Kinship is probably next unless Gravitas gets more frozen meals back in the que.