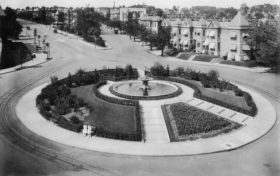 I started this blog on Blogger and then due to some changes regarding URLs I moved to Moveable Type and then my host no longer supported that and so I’m using WordPress. I thought I added the Blogger posts but discovered the only posts that migrated over were from an announcement page I had. I have the main Blogger posts at dcinshaw.blogspot.com, but I have finally imported those posts, images and comments to this blog. Now there are over 2,500 posts here.

Sadly the Moveable Type (2010-2013) posts are still in limbo. Right now I can’t seem to locate those files. I’m sure they are on an external drive somewhere.

It has been a while since I looked at the Black Homeowners of Truxton Circle. I stopped because I got stuck on a mystery and I’m just going to have to let it go. I will never know who the mystery man was and that’s okay. I’m going back to the Black homeowners because of on-line conversations with Richard Layman and things I’ve been reading about redlining and restrictive covenants.

In my own research, I have not seen any restrictive covenants. I believe it is a thing that would be found outside of the L’Enfant planned city and in Washington County, those areas north of Florida Avenue. Mt. Pleasant, Trinidad, and Bloomingdale are the creations of developers who could put in those restrictions. So if you lived in Old City, the likelihood that your fee simple house (apt buildings could be a different thing) had a racial restriction would be low.

When looking at the property records, I have tried to make heads or tails out of them, but they are beyond me for now. I’ll see person X seem to transfer to person Y , then years later Z shows up with X. With E.L. Haynes who owned my house and several other properties in Truxton Circle and DC, she was able to borrow money for her rental properties. The financial details are in her papers at Catholic U’s archive and not so much with the Recorder of Deeds. Anywho, Black people managed to borrow money from somewhere to purchase real estate. Banks practicing redlining weren’t the only game in town.

Below is a table with data from the 1940 census, I’ve had to cut a lot out so it could fit, but know they are all for 3rd Street, they are all owners and African American.

I highlighted 1649 3rd Street, because that was my hang up, but I’m letting go, letting go. Instead I need to figure out how to make a decent table. This doesn’t seem like a long list, but remember in urban areas, more people are renters.

The owners on 3rd Street NW are varied. There are government workers, widow women, skilled labor and an educated professional. The youngest is Anna Turner, a 37 year old waitress at 1337 3rd St NW. She lived with her son and a female lodger, a teacher, the eldest a 79 year old widow Ada Anderson.