Baltimore is one of the reasons for renaming this blog.
I’ve been spending a fair amount of time in Baltimore City lately. Why? I’m looking for an investment property there. I have another investment in my home state, but there is a time limit of how long I plan hold it so I’ve been looking for a replacement closer to home. 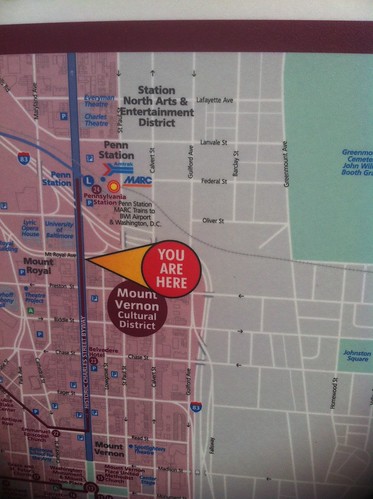 Anyway, I’ve spent days and some nights hanging out in Baltimore, getting to know the city better, and I couldn’t help but notice a few differences between DC and our sister city to the north.

More Industrial
DC was never an industrial city. The government is and was our major industry. Not just the government politicians, but government bureaucrats, and government contractors. Somehow you throw in a lot of non-profits, including universities and that’s us. This creates place for a lot of literate people who may or may not be intellectuals and thinkers, a knowledge based economy.

Baltimore has a strong unquestionable industrial history and sorta present. I highly recommend wandering over to the Baltimore Museum of Industry just to learn a bit about the various blue collar employing industries that made Baltimore great. But now, since American manufacturing isn’t as big as it used to be, the joke is maybe one can get a job at John Hopkins, the behemoth school that seems to be taking over a large portion of the city and is its own industry. The University of Maryland- Baltimore and MICA (two other schools) are attempting to carve out their own parts of the city at a much slower pace. Industry-wise a lot of people are placing their bets with Under Armour (you thought I was gonna write Horseshoe Casino?).

And Baltimore is either more accepting or comfortable with its industrial side as you could be walking along in a neighborhood, turn a corner and find garages where people work across the street from houses where people live. Washington wouldn’t stand for it. DC’s industrial areas are shrinking and being replaced by housing. At some point we’ll be nothing more than offices and housing, with a little retail on the ground floor. Yes, I know of the small breweries and distilleries, but we are not going to sprout a tiny Brooklyn (NYC) anywhere as there is very little industrial space for this sort of experimentation without having to hop through permitting and zoning hoops. DC may give industry lip service but our heart is not in it.

Poor White People
Baltimore has plenty of what you don’t see in the District of Columbia. Poor white people. Goes back to that industry thing. We (DC) don’t have a lot of the kind of jobs that hire poor people. No industrial jobs and job gentrification, where the job is more costly for the employer than it needs to be, so the employer is less likely to take a chance on someone with less education and experience.

Loosey-Goosey
It is hard to put my finger on and it does not apply in all areas.
The best example was experienced when the Help and I went dancing in Baltimore. The Help remarked there was more “flailing” on the floor than we were accustomed to. When we dance in around DC, even beginners make an attempt to do it the right way. The message we got in Baltimore was there is no right way, just have fun. And when people are just having fun it looks like a whole lotta chaos to those of us accustomed to more orderly events.
Sometime ago somebody foolishly tried to make “Keep DC Weird” a thing. That’s Austin, TX thing, not ours. Something like “Keep DC Wonky” is more appropriate, because we can get wonky. What do you expect in a city based on a knowledge economy? Baltimore is friendly, but not at all wonky.

Vacant Houses
As you may know I still control the DC Vacant Properties blog. It’s a slow project because really, we don’t have a lot of vacant properties with our real estate booming and all. Not a lot when compared to Baltimore. O-M-G! I see vacant houses coming in on the train, walking around scoping neighborhoods, they are all over the place. Blocks upon blocks, rows upon rows of vacant properties.
I know 20 years ago, DC also had blocks of vacant crumbly rat holes. Say what you want about gentrification, it does cut the number of vacant houses down, leaving the hard to deal with sticklers (Shiloh properties, 509 O St NW, etc).
Baltimore has a great vacant properties blog, Baltimore Slumlord Watch. I love how the blog’s author names the city council person, state senators and state delegates for where the vacant property sits, along with links to those politician’s contact info or websites. By naming those persons of power in the posts and tagging them, it can tie that vacant property to their name.