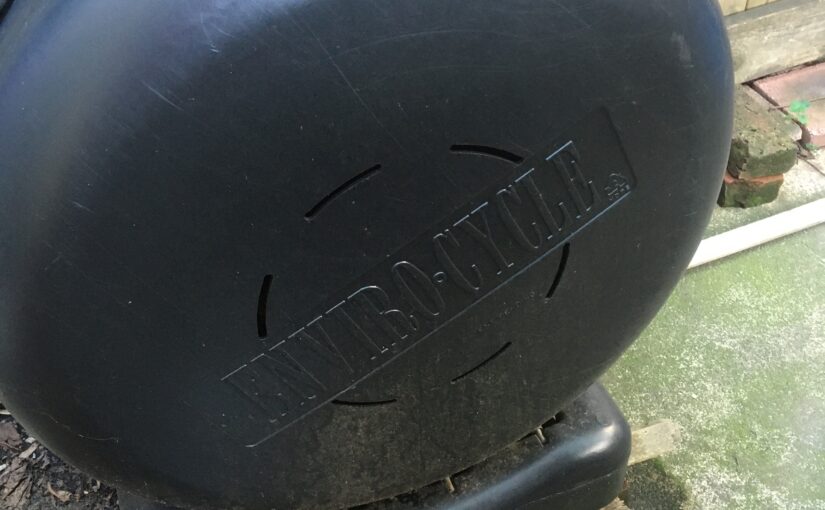 Sometimes you never know what you had until it is long gone and you can never get it back. That is how I feel about my-no-longer-mine Envirocycle composter. When I first moved to Truxton Circle, a co-worker (now department head) gave me his composter. He and his partner had no use for it. They lived a couple of miles where I live now in the Maryland suburbs. He was nice enough to throw it in the back of his truck and deliver it to my Truxton Circle home.

I dumped my old plants in it. I dumped some cherry tomatoes from a house warming party in it. That resulted in having accidental cherry tomatoes growing in the front yard. I put shredded paper from shredded documents in it.

I took earthworms found on the concrete patio in it. At another point I bought some earthworms in the mail and put them in. This resulted in the great worm escape on an unusually hot day where worms were oozing out of the slits en masse. It was a sight.

Did it stink? On occasion, when I failed to balance the ‘greens’ and the ‘browns’. The greens were the romaine lettuce butts, egg shells, whole avocados gone bad, remaining parts of avocados gone good, and all the raw veggies that were composting in the refrigerator. I’ll also include tea bags, loose tea, and lots of coffee grounds from nearby coffee shops, when the neighborhood starting having coffee shops. The browns were the shredded papers, dryer lint, and maybe the odd batch of leaves.

I took it for granted.

When we decided to sell our Truxton Circle home I had to find a new home for the composter. By this time, 19 years had passed and around year 17-18 some urban wildlife tore a hole in the side. I suspect it was the big bag of fruit I threw in there.

I put the composter on Freecycle, with pics of the hole, and a fellow with a pick up truck picked it up and took it away.

I was in my new suburban home and getting tired of putting food scraps down the garbage disposal drain or in the trash. The place where we moved has a composting program, however, I wanted to get back into gardening, and I want my own compost, where I know what’s in the compost.

So I went looking for a new Envirocycle and holy heck those suckers are $500! I could buy similar tumbling composters and I really don’t need the feature that made it great for my urban back patio, the system that captured the compost tea and kept it from staining the concrete.  But I really like the door for the composter. I like that all I had to do was turn the composter, no lever or having (but I did) to go in and turn the compost myself.

I don’t really like the new style of Envirocycle. The old model had several little slits, and this new one just has a vent at the top. I guess that would prevent the hole problem I experienced.

Since I’m not paying $500, I bought a $80 stationary composter. It’s eh. I’m just happy I’m not throwing perfectly good scraps away. I might break down and buy a tumbler. I just don’t see one that I like for a price that makes sense to me.

I miss my old Envirocycle. I guess you really can’t appreciate what you had until it is gone.