I need to mention that the night before I was scheduled to pick up our Kinship order our kitchen sink faucet died. On Saturday, Easter eve. So my mind was more focused on being able to clean our food and make food. You do not appreciate all the things you need a kitchen sink for (beyond washing dishes) until it is out of commission. This is my excuse for less than lovely photos. 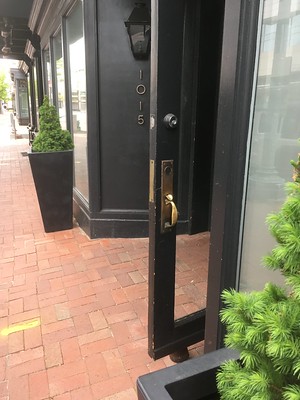 I ordered this meal a few days earlier for pick up via the Tock website. I had held off on ordering from Kinship because it wasn’t clear beforehand what the price points would be. But once ordering the prices and options are revealed. I ordered a $50 lamb meal for two and their cocktail Split Tail ($45), which is their twist on the old fashioned.

Like Rose’s at Home you have to heat it up, so it doesn’t matter how long it takes you to get home and it allowed for sticking it in the fridge for later while one deals with an emergency. 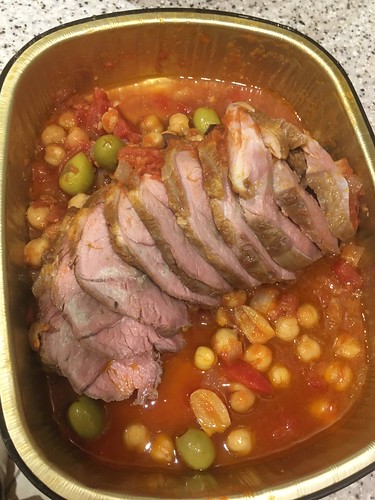 The leg of lamb roast came with some Israeli couscous (not pictured). It came with heating instructions and the couscous required heating in the pot with 1oz of olive oil (if my memory serves me correctly). I misplaced the instructions, they probably got swept up with the sink parts. 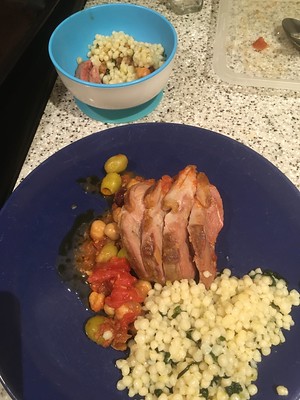 Although we enjoyed the meal, the 2.5 year old was less than impressed. He didn’t like the couscous, probably a tad too salty for him. And he didn’t care for the lamb, even though I only gave him the well done parts and cut them up small. It seemed too chewy for him. He tolerated the garbanzo bean stew (no olives) accompanying the lamb roast. At first sight, I wasn’t too impressed either, but a few bites in the flavors started working really well. The saltiness of the couscous worked with the lamb and the stew when all of them came together. A two year old is a horrible dining companion so my spouse was really trying to sell the meal to him, and Destructo-kid was not buying. I’ll assume the spouse liked it. 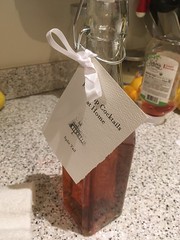 I did not get to the cocktail until after the kid was long put to bed. The Split Tail is a twist on an Old Fashioned. It has rye, Japanese Whisky and Barrel Aged Gin with Walnut Bitters and Demerara Syrup. It serves 6 if using 2.5 oz per serving. I had to provide my own ice and orange peel. Thing is, I don’t have ice but I did have some tangelos around. I had to improvise on making an ice cube, one of those huge ice cubes. The freezer space is at a premium in our house so ice cubes are low on the list. 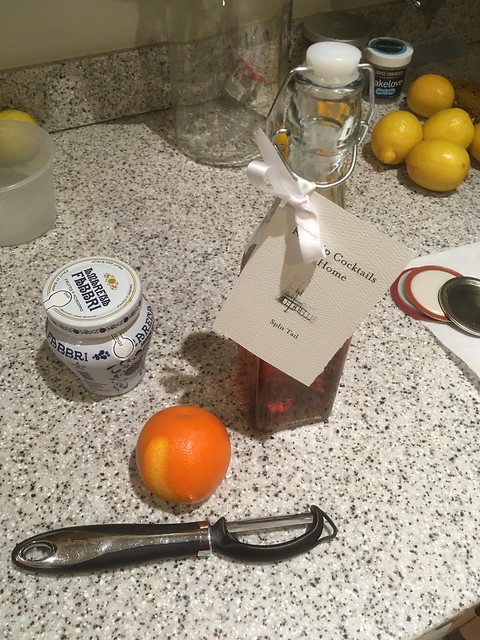 It makes for a nice Old Fashioned….. when you add a cherry to it. And after the ice melts, the next morning you have a lovely shot of flavored water. Good stuff.

I’m not sure if there is another starred restaurant in the que. The fixing of the sink, which includes an expensive wrong part that has yet to be attempted to be returned, set us back a little, so this week we’re making our own food. Maybe next week I’ll look into someone who does their own delivery.