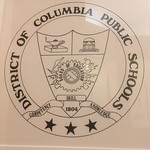 One thought on “Voting with your feet or #SaveShawMS”