Recently a co-worker of mine retired. At his retirement party a few other retirees I knew showed up and I remembered what the place was like when they still worked there, and how the place will change when my co-worker becomes another retiree. The building where we work has, for the most part, despite several renovations since it was built in the early 20th Century, remained unchanged. But the workplace keeps changing, with each new person, with each retirement, departure, and in some cases, death.

The neighborhood is the same way. The spirit of my block changed with the crowd who showed up in the 00s and eventually departed in the early teens. The buildings has relatively remained unchanged. There has been some infill here, a pop up or pop back there, but for the most part the buildings have not changed much over the years. But the block has changed, and will continue to do so long after I’ve moved on*. If there was to be another possible historic landmarking or whatever in Truxton Circle I would predict it would happen with the Bates Street houses. I’d hope not, but there is a history there, and with a few exceptions the overall style on the unit to the 200 blocks of Bates have been unchanged. 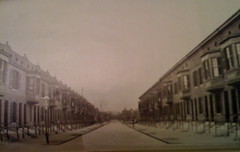 However the character of Bates Street has changed, and continues to change. It’s not the same street when the developer, the Washington Sanitary Improvement Company built them in the 1900s. It was purposefully segregated and all rentals. By the 1940s it there were a few Black households on Bates, and one of the few places with Whites in Truxton Circle. By the 1960s the blocks were o 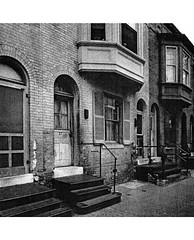 n the government’s radar for urban renewal because it was run down. Most of the families (according to a report about Bates of the time) could only afford public housing, if they were to be relocated. However the urban renewal and the large scale demolition of neighborhoods was challenged. Instead the some of the Bates St buildings were rehabilitated, but the neighborhood was still struggling. When I showed up in the early 21st Century there were many Section 8 houses, or houses that neighbors strongly suspected were Section 8, because the families’ crises kept playing out on the streets. A lot of those people are gone, but the buildings, for the most part, remain the same, all without the Historic Preservation Review Board.

Being a person who participates in communal worship, I have heard on more than one occasion, a church is the congregation/ people, not the building. Likewise, the character of the neighborhood is the people, not the buildings. Bates Street has been a White enclave, a poor Black street and now a mixed income, mixed race neighborhood.  In twenty years, it might be something else, and no building preservation will prevent it.

*There is no way I’m retiring here. The stairs in my house are murder on my knees.